I just finished reading and decided to leave a quick review. Sci-Fi fans who are aching for a quick two-hour read will no doubt thoroughly enjoy this fast-paced action/adventure offering by Patrick F. Johnson. I have left a review at Amazon and Goodreads. If it’s something you may be interested in give it a look and take it out for a spin. Support authors, read for the love of reading!!  Review and link listed below! 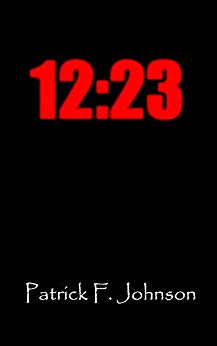 Johnson’s short story offering, “12:23” creeps ever so quietly from the shadows offering little clues to the overall grand scheme before it rapidly crests and freefalls into science fiction thrills and chills that lasts until the final page. Cram packed with enough moments to fill a full-length novel, Johnson provides just enough backstory with the when and how to effectively draw readers in before he turns his creation on its ear destroying everything around him.

What starts as a genuine look at the world of writers soon switches gears into a science fiction mind-bending adventure that packs a punch. At the start, readers are introduced to aspiring authors Kim and Dylan who end up in the same place, at the same time strangely aware of each other but have never met. Supporting characters are introduced to the mix and, spoilers aside, the oddities and similarities quickly escalate cranking the story’s pace into overdrive and sending it rocketing into a whole different feel in the process.

Johnson’s ability to pepper his work with juicy tidbits of information throughout the breakneck speed of 12:23 only further affirms his expertise to great storytelling and the less is more tactic that keeps readers fully entranced by the magic within. While Johnson does answer some of the questions that come about within 12:23, like many a great sci-fi offering before it, others remain to allow readers to formulate opinions and to stew over the possibilities that a sequel may come along shedding new light on the main story and sending us off on another adventure.

Walking the line between mystery and science fiction, Johnson masterfully explores each grandly during the two-hour adventure he has created that will no doubt entice and titillate fans of both. Reading through, 12:23 feels as if it derives a little bit of inspiration from the television series “The Twilight Zone” before morphing effortlessly into the film “Independence Day,” and I for one could not have been more thrilled to sense it as I greedily devoured the entire story in one sitting.

Although a quick read for most and one that many will wish had carried on at least another twenty pages to slow down the white knuckle ride we all bought tickets for, 12:23 gives us everything we want in a science fiction short story. If a suspenseful mystery featuring trippy head games, driven characters mingling with aliens, odd places, spaceships, and the pew-pew of laser beams wrapped around a story with heart gets your blood pumping, Johnson’s 12:23 will not disappoint.

Living in Florida, Kester Finley grew up in the backwoods of Zephyrhills. The country life, its slower pace, and its mix of colorful characters eager to share inspired him to write. Fascinated by the supernatural, he has spent time studying the paranormal and its history while enjoying the world of superheroes and magic. He is a proud geek, a lover of comics, a horror-film junkie, and a damn good role player. He currently resides in Spring Hill whiling away the hours writing, trying to figure out what he wants to be when he grows up, what to have for dinner, and trying to solve the mystery of life beyond the veil. View all posts by Kester James Finley