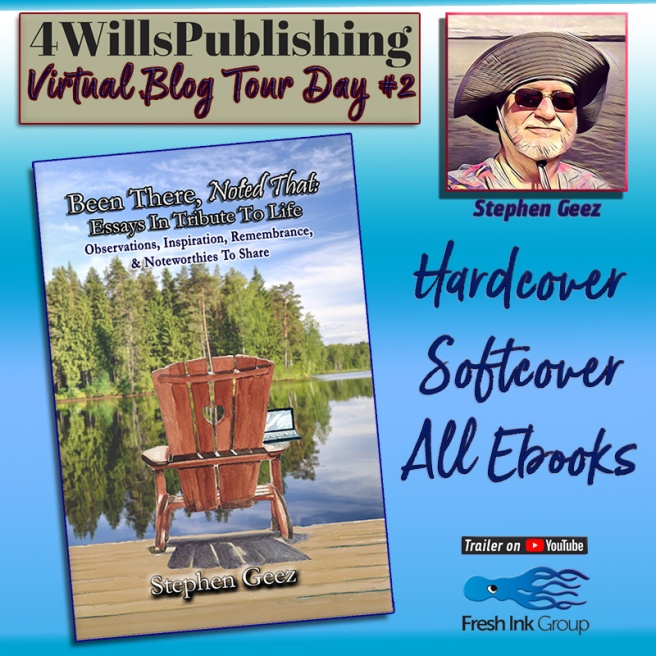 Greetings, friends! Welcome to the second stop on my 4WillsPublishing Blog Tour celebrating the re-issue of my memoir-shorts, Been There, Noted That: Essays in Tribute to Life. It has updated cover, new graphics, new book trailer, and now a first-ever jacketed hardcover edition. The book’s ruminations range from light and humorous to heartbreakingly poignant, but all spring from my own experiences. Thanks for visiting, trying this sample, and commenting!

Cow in the Creek

When I convinced my friend Bill to accompany me on a raft/canoe trip through Alabama and Tennessee, never once did I imagine that he would nearly be eaten alive by a vicious cow.

Five days of torrential rains had swollen White Oak, one of the creeks where my father grew up fishing from holler to holler. We planned to put in several miles east of Highway 13, expecting eventually to reach a Kentucky Lake boat landing beside the remnants of a decrepit washed-out bridge.

Uncle Calvin’s car trouble and a lengthy detour conspired to put us hours behind schedule, but we set out, confident that rivers and creeks always promise one thing: Stay the course, regardless of obstacles and twists and turns, and you’ll eventually get to where you’re going.

The scenery looked spectacular, the sky vivid blue, the sun bathing us in its golden glow. We paddled enthusiastically, making up for lost time, but when the temperature hit something like 200 degrees, we discovered that Bill had brought the wrong float bag, the one packed with wetsuits for the next day’s Ocoee rafting trip. We had no shorts or short-sleeve shirts.

We were in the middle of nowhere, and hadn’t seen a soul, so if anybody did spot us that afternoon, now they know why two grown men decided to canoe in boxer shorts. Bill presented quite a sight, lobster-red due to his tendency to burn even at the mention of sunlight, a rather big guy who—well, he makes his end of the boat sit rather low in the water.

That’s when we careened around a bend and spotted our adversary . . . a cow in the creek.

It was a calf, really, just standing there looking at us—two nearly naked nuisances paddling a canoe.

Frankly, I didn’t think much of it, and we had plenty of room to maneuver around it, but Bill absolutely freaked. Apparently, the sum-total of his cow experiences had been to hang his head out car windows and Mooooo at indifferent herds. He didn’t know that cows care more about the flies swarming their own rumps than about interlopers floating by in boats, or that their attention spans rarely last beyond the initial howdy-do.

So Bill panicked, paddled furiously, spun the boat around, and toppled us over. I found this rather annoying.

I managed to calm him down, then convinced him to risk life and limb by warily approaching the savage beast. The cow retaliated . . . by meandering up onto the gravel bar and waiting patiently for us to go away. Bill took a picture, proof of his brush with the most hideous of gruesome deaths.

As the air cooled, we dressed again, then found ourselves braving twisty rapids connecting deep crystalline pools that hosted lazy bass and curious bream. A Great Heron followed us for a while, and I tried to convince Bill it was planning to swoop down and peck out our eyes so the cows could move in and finish us off, but he didn’t fall for it.

As the creek widened into deep floodwaters, we had to paddle hard to keep moving. I noticed that navigating our course had mimicked what it’s like to live a long and full life: launched into the youthful swift-flowing currents of promise and potential, maneuvering around the obstacles and twists of fate, eventually slowing in the still waters of old age where even small progress requires extra effort.

We watched a glorious sunset, then found ourselves blanketed by a star-sequined shroud of impenetrable darkness, flashlights our only hope of surviving boat-eating trees. As the lake currents grew treacherous, the water choppy, Bill shared several colorful opinions about my skill at planning canoe trips, but we eventually found the decrepit old bridge, startling a young couple stargazing amid the rocks. As I stowed the gear, I could hear Bill regaling them with his tale of the deranged, bloodthirsty cow in the creek. I didn’t hear it all, but I think he got to be the hero in his version.

If life is like a trip down a rain-swollen creek, then we better watch out for the cows. You might not consider them a threat, but one man’s cow is another’s fire-breathing Cow-zilla . . . and you never know which ones might be in cahoots with the Great Heron.

We drove to the Ocoee with barely enough time to stop for breakfast. Bill ordered a thick steak with his eggs, and a big glass of milk.

I figured he’d already forgotten about the vicious cow that nearly ate him alive, but he did seem to take malevolent delight in carving his meat, chuckling to himself once or twice, grinning with every bite.

This tour sponsored by 4WillsPublishing.wordpress.com

Living in Florida, Kester Finley grew up in the backwoods of Zephyrhills. The country life, its slower pace, and its mix of colorful characters eager to share inspired him to write. Fascinated by the supernatural, he has spent time studying the paranormal and its history while enjoying the world of superheroes and magic. He is a proud geek, a lover of comics, a horror-film junkie, and a damn good role player. He currently resides in Spring Hill whiling away the hours writing, trying to figure out what he wants to be when he grows up, what to have for dinner, and trying to solve the mystery of life beyond the veil. View all posts by Kester James Finley